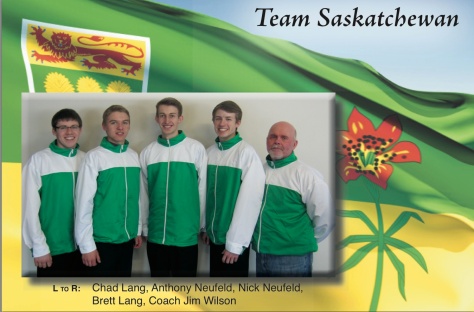 Okay, this has nothing to do with buying or selling homes, but I thought I would let you know that my son Nick is heading out to the Optomist Under 18 Curling Championship in Vancouver this week.

For Nick and his cousin Anthony, this is their second trip to the event. They finished 5th at the event in Toronto last year with team mates Brady Kendel & Jake Hersikorn. Brady and Jake were too old to compete this year, so Nick & Tony teamed up with a couple of their long-time rivals, Chad and Brett Lang, and the four of them won the Provincial Championship last weekend in Shaunavon.

We are all looking forward to a great event in Vancouver this weekend. There will be teams competing from Japan, the United States, and Canada. Team Saskatchewan is in the Men’s A Pool with Japan, B.C., Manitoba, and the Northwest Territories. You can follow the event at u18curling.ca